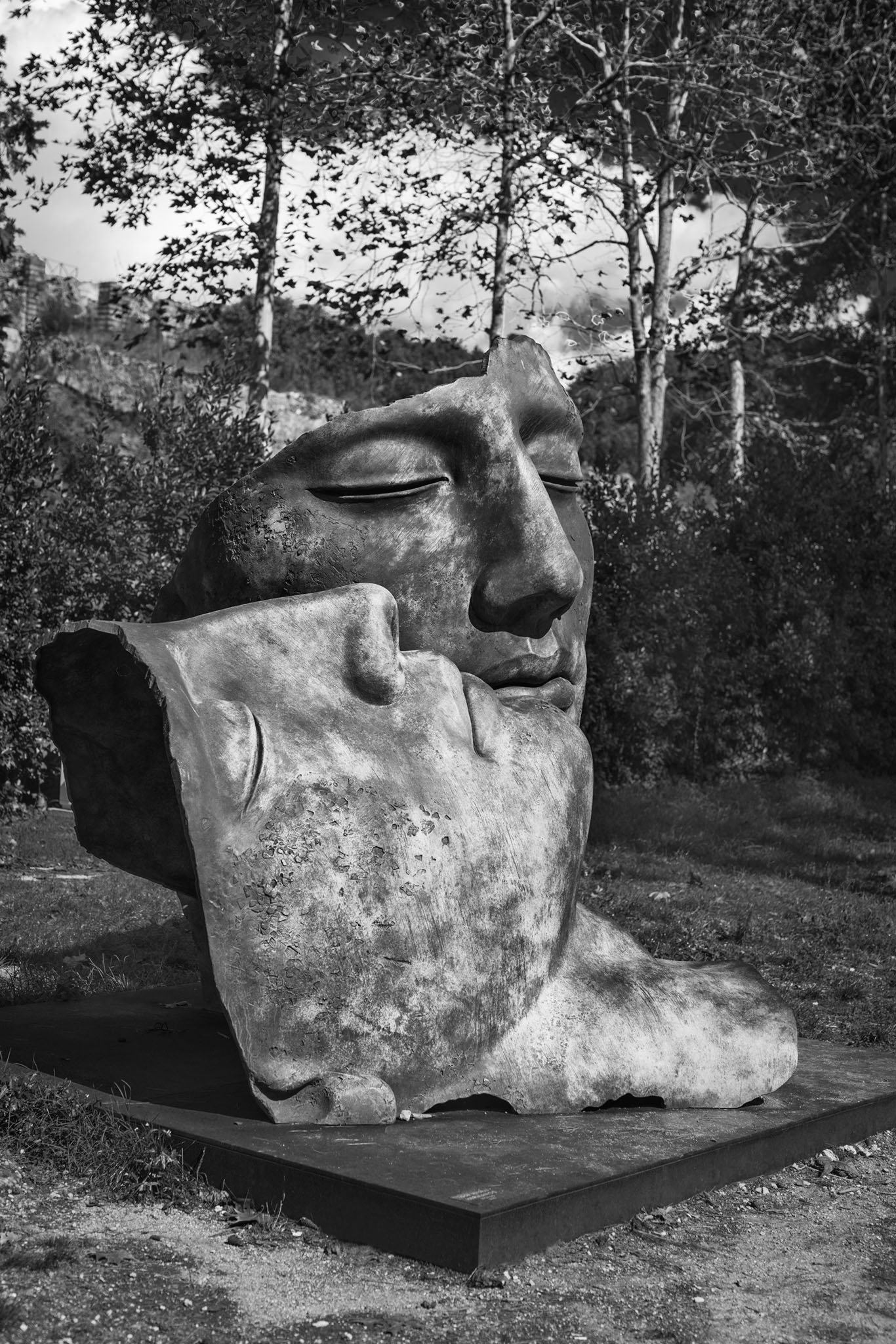 Mitoraj in Pompeii - I visited Pompeii...

… in October last year, during a tour around Italy. I heard about this ancient city in my childhood, I knew that it was destroyed during the eruption of Vesuvius, later its ruins were unearthed and made available to the public. I had my own ideas about Pompeii, shaped by movies from the times of the Roman Empire, and I was looking forward to confrontation with reality. We came to Pompeii – me, my beloved Ewelina and dozens of participants 🙂 – straight from Caserta, where we visited the Bourbon Palace. We walked about the area of ​​the old town for about two hours, visiting what was left of the old villas, baths, temples and public houses. However, I will write about it on another occasion. Now I would like to focus on the event in which we had the opportunity to participate, and which I did not know about before. A few months earlier, the characters from ancient legends lived in Pompeii. Heroes, gods, creatures from the past, heroes were created in the studio of a Polish artist, Igor Mitoraj. I would like to introduce you to the unique, one of its kind exhibition “Mitoraj in Pompeii”. I invite you to see the photos I had the opportunity to do while visiting the exhibition. I invite you to read about Pompeii, about Igor Mitoraj and about the exhibition itself 🙂

Pompeii (Latin: Pompeii, owner of Pompeii) is a city in Campania, Italy, about 20 km south-east of Naples. This city was completely destroyed on August 24, 79 by the volcano eruption of Vesuvius. Two other cities that destroyed the same element are Herculaneum and Stabie.

The city was founded in the 7th century BC. through Osków, then it was controlled by the Greeks, Etruscans and Samnites. At the end of the fourth century BC. Pompeii made an alliance with Rome, which obliged them to military aid, but left Pompeians autonomous, their own offices and language. In the third and second centuries BC the city was experiencing a period of dynamic development, being one of the most important ports in the region. Pompeian hands also contained the mouth of the navigable river Sarnus. The city and its surroundings were located on fertile lands where grapevines, olives and grains were grown. In the second century BC there was a significant development of the city towards the north and east, as well as the reconstruction of the central parts of the city and the representative buildings located at the forum. The number of important and representative buildings and their size allowed Pompeii to distance the then-Rome in this respect. The “allied war” of Pompeii stood, in 89 BC, on the side of the Italian cities. After the end of the war, the city was deprived of all rights and converted in the year 80 BC. in the Roman military colony “Colonia Veneria Cornelia Pompeianorum”. For over twenty years, indigenous people were deprived of the majority of civil rights and discriminated against the colonists recruited among the veterans of the Sulla army. Decades later, the city began to develop. The city’s greatest development took place in the 1st century AD The main source of income for the residents was trade connected with the seaport in the city.

August 24, 79 volcano eruption Vesuvius covered Pompeje with a few-meter layer of ash, burying the city and residents who did not manage to escape (previous research revealed about 2,000 bodies). Pliny the Younger, who left a letter describing the eruption of the volcano and caused by the eruption of the tragedy, witnessed the extermination of the city. According to his description, the explosion occurred around noon. In the first phase, high poles of fire emerged from Vesuvius, then a black cloud that obscured the sun. A shower of hot lapilli and volcanic ash poured in Pompeii, which caused fires, killed people and caused the building to slam. Residents also killed poisonous gases coming out of the volcano. The eruption lasted for three days, as a result of which the city covered a layer of ashes with a thickness of 5-6 m. Destruction covered the area from Herculaneum to Stab. 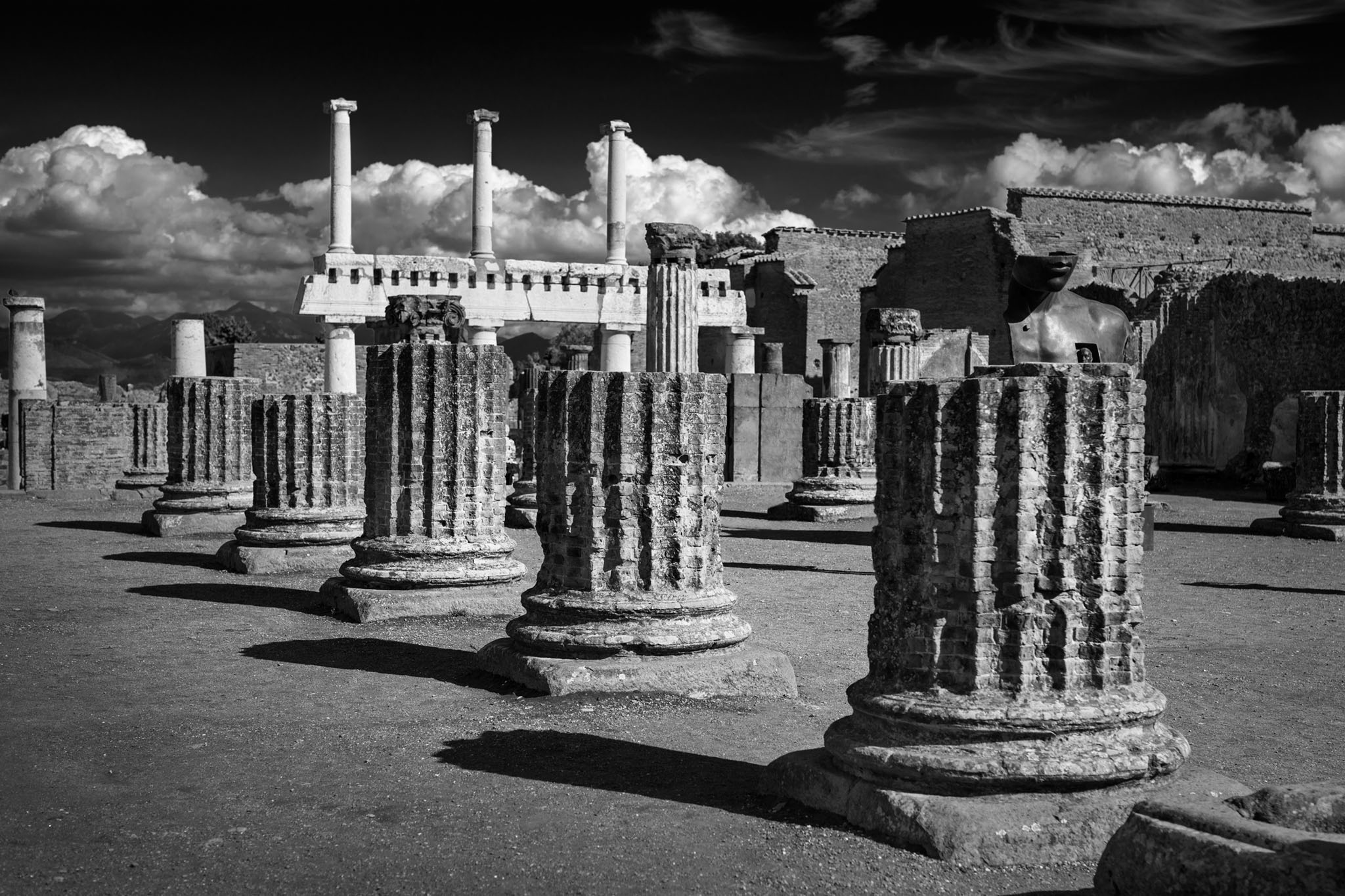 It was not until the end of the 16th century that ancient inscriptions were discovered while working on the construction of the canal. Searches carried out nearby confirmed the existence of the city ruins underground. Work was carried out from 1748, systematic activities in this direction began in 1861 by Giuseppe Fiorelli. Not only works of art were unearthed, but also the urban layout of the city founded on a regular grid of cobblestone streets. Fiorelli made plans for the whole city, divided them into sectors, numbered the houses. He planned systematic work, sector by sector. He also began the reconstruction of some buildings. From 1909, the work was managed by Vittorio Spinazzoli. The sculptures discovered in Pompeii were made by local artists with tuff volcano, marble, stone, wood, bronze. These are portraits, reliefs that are decorative architectural details. Among the smaller sculptural products bells suspended freely were found, so that the smallest movement of air could make them vibrate. Some of them have an erotic form. Archaeological traces have not yet been completed. A significant part of the finds are kept in the National Museum (Museo Nazionale) in Naples. The casts of the inhabitants’ bodies make the greatest impression. The ashes covering Pompeii quickly solidified, keeping the shape of the buried bodies inside. Fiorelli has developed a method for making their casts. Through a small hole poured plaster stucco that filled the entire empty space. After binding the plaster, he removed the ash layer revealing casts of bodies, objects, building elements, etc. Later, the transparent plastic material was used, which allowed to see the small objects hidden inside the casting. The most important discoveries made in Pompeii are wall paintings that have been preserved in large numbers in more representative interiors of houses, in quite good condition. This allowed the reconstruction of the history of Roman painting up to 79 years. In addition to numerous paintings, interesting decorations in the form of mosaics have also been found. They were used mainly in places exposed to moisture and water (on floors, near water tanks, fountains, etc.).

Igor Mitoraj was born in 1944. in Oederan (Saxony) as a son of a Pole and a Frenchman. He spent his youth in Poland, lived close to Cracow, where he studied with Tadeusz Kantor (1914 – 1990), a well-known painter and theater director. In 1968, on the advice of Kantor, he left Poland for Paris, where he joined the State Higher School of Fine Arts in Paris. The widespread success of his first major exhibition in 1976 (Galerie La Hune in Paris) meant that he devoted his talent solely to sculpture. Shortly thereafter, he was offered an exhibition for the ArtCurial gallery in Paris, run by the nephew of the then French president Mitterand. To prepare works for this exhibition, Mitoraj went to the center of artistic foundries working in bronze and masons working in marble in Pietrasanta, Italy for a year. The first bronzes of Mitoraj were created there, as well as the first monumental white marble sculptures from nearby Carrara. From the moment of the ArtCurial exhibition in 1977, sculptures and drawings by Igor Mitoraj were shown at 120 individual exhibitions around the world. His sculptures, often gigantic in size, stand in representative spots of many cities – including in Paris on La Défense and in Rome, Milan, Lausanne, London, Krakow, Scheveningen near The Hague, in the USA and Japan. The main theme of Mitoraj’s sculptures is the human body, its beauty and fragility, as well as the deeper aspects of human nature that are influenced by time and circumstances become degenerated. Appealing, even literally (sometimes in the title of sculpture: Icarus, Tyndareus, Centauro, Eros, Mars, Gorgona, Paesaggio Ithaka), to the mythology or history of Greece and Rome, he “quotes” the beauty and perfect proportions of classical sculptures while making the audience aware their human nature and imperfection by deliberately cracking and damaging the surface of statues and even knocking them to the ground. Mythical heroes, wounded, imperfect look at the viewer with empty eye sockets, often covered with shrouds, like wounded or crippled creatures, often mute – with mouth covered with cloth. Mitoraj’s style of interpreting the antique with the introduction of distinct accents of modernity is now recognized by art lovers around the world. The characteristic element of Mitoraj’s works are lips that always have the shape of the lips of the author and constitute an informal “signature” of the sculptor on the work.Igor Mitoraj died in 2014. in Paris. 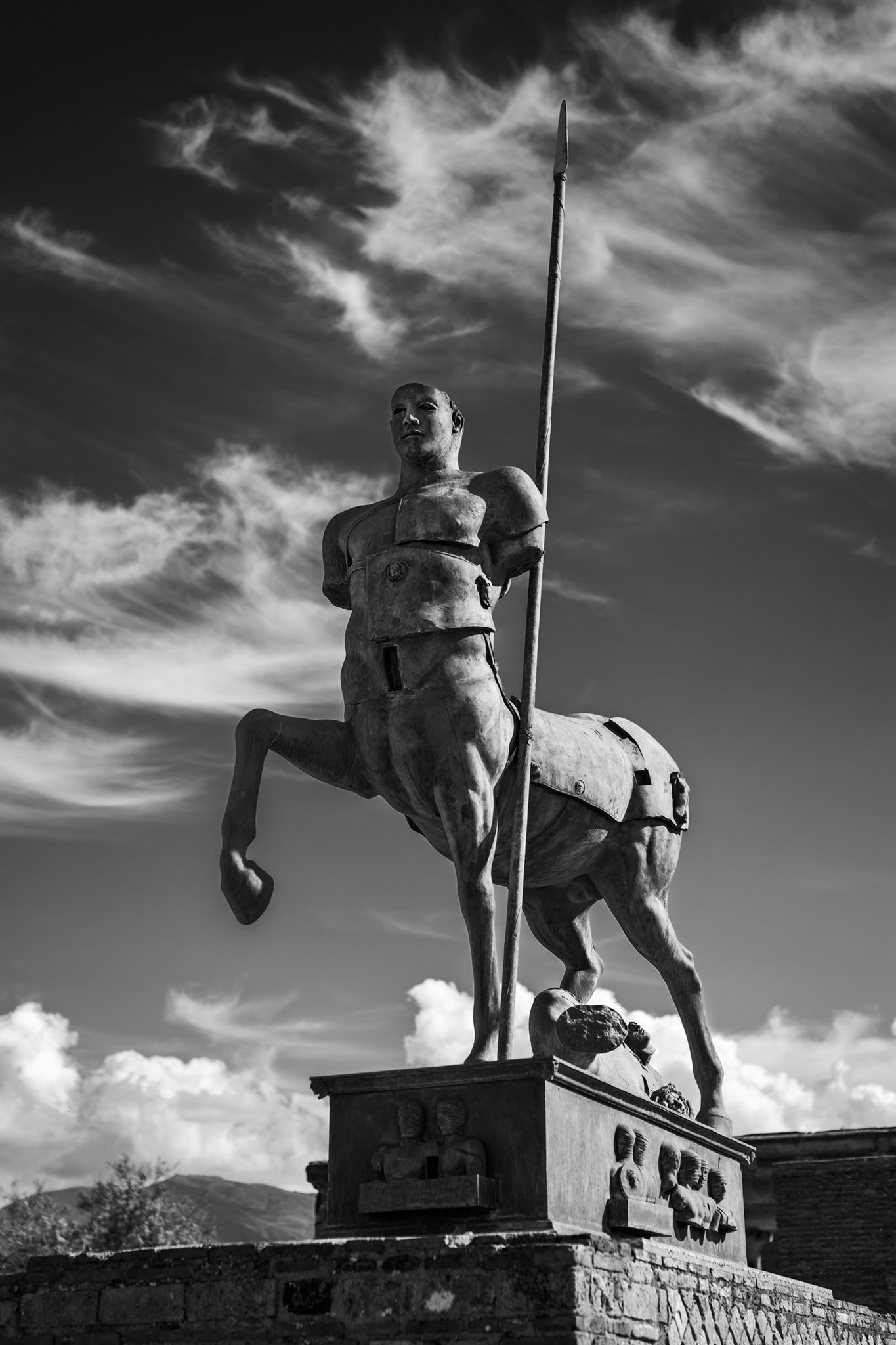 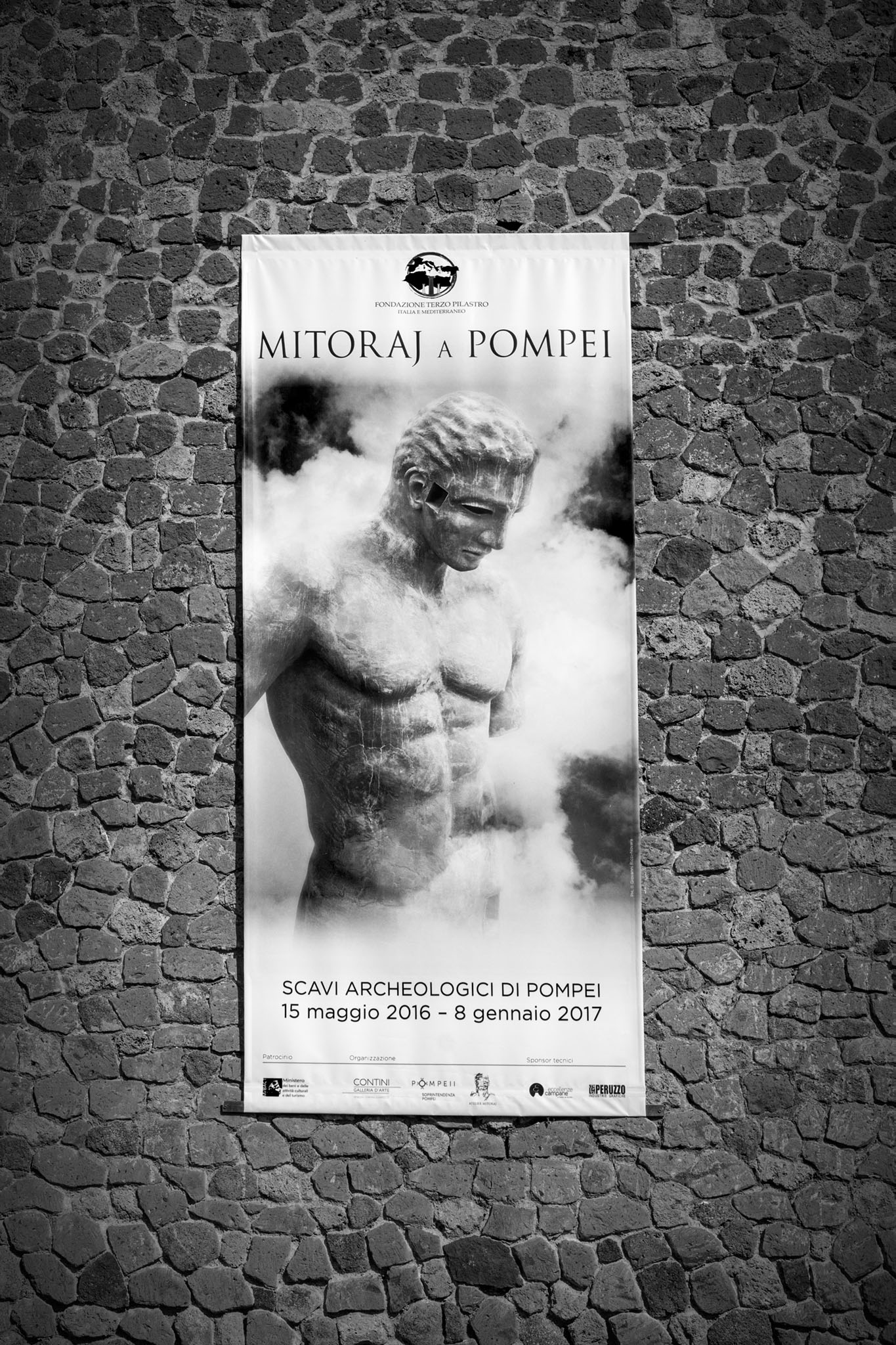 Mitoraj in Pompeii - about the exhibition

The exhibition of sculptures by Igor Mitoraj in ancient Pompeii was opened by Italian President Sergio Mattarella on 14.05.2016. The exhibition consists of 30 monumental bronze sculptures inspired by ancient art, integrated into the ruins of the ancient city. Before the official opening of the exhibition, Italian Minister of Culture Dario Franceschini said that he met with an artist in Pietrasanta in Tuscany, where Mitoraj lived and worked. – He was already sick. He revealed to me that he dreams about exhibiting his work in Pompeii – the minister added. Sergio Mattarella called Igor Mitoraj “an extraordinary artist of our time”, and the exhibition – “an unusual combination of antiquity and modernity”. The Italian president emphasized that the area of ​​archaeological excavations is an “absolutely natural” location for the works of the sculptor. The exhibition can be seen until April 2017.

Mitoraj in Pompeii - Impressions from the exhibition

Delight, in one word, I would summarize my impressions after seeing the exhibition. Figures of fallen, ancient heroes perfectly fit into the landscape of the ancient city. Walking along the stone streets, among the ruins of old houses, we pass the heroes from the legends of our childhood. Damaged, cracked statues also recall the memory of people who died covered with volcanic dust. I have never been to Pompeii before, but I would like to go back there one day. I have the impression that when I see this place again, this time deprived of fallen heroes, it will seem sad and abandoned. As if the last inhabitants have gone forever.

Mitoraj in Pompeii - my view of the exhibition

All photos used in the article are made by me. While editing the text, I used information about Igor Mitoraj and Pompeii, which I found on Wikipedia and from press articles dedicated to the exhibition, which I found on the websites r.pl and the Foundation of Christiania.